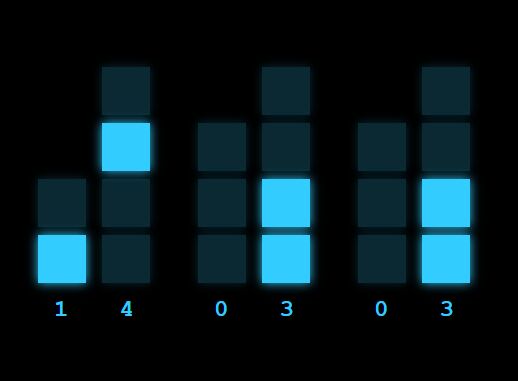 A number of places sell items like the ThinkGeek LED Binary Clock.  These proport to show the time in binary and thus be all geeky and cool.  But they fake it.  They just take the normal standard time in HH:MM:SS format and show each of the six digits as a binary number.  But it is still based on the 24/60/60 divisions of the day, not to mention the decimal digits themselves.  Some allow you to switch to a "true binary" where if the minutes are 22 (for instance) it represents this as a single binary number (10110) rather than doing the two seperate digits (10/10).  Slightly better, but the base is still 24/60/60.  How can you call that binary???

This is simply NOT geeky enough.  True geeks will want a clock like what I present here.

This is a true binary time clock where the time is represented by one binary fraction representing the portion of the day that has passed.

The first bit is half days, the second is quarter days, then eighths, etc. The clock shows the local time from your computer and reflects the time zone you have set, so it is only as accurate as your own computer's clock.

You can find it here.

@Fenhl made a full screen version of the clock.

You can find it here.

@Lonczy made a Pebble app version of the clock. You can find it here.

Note:  Some versions of IE for Windows don't seem to like this page.  Try Safari or Firefox if the clock above does not seem to be working.

For this page I started with code from Snarkles.Net Useless Binary Time (SNUBT) which simulates the Think Geek binary clock.  I changed the logic around to show the "true binary time", removed some things I didn't need, moved the balls around to fit this purpose and then added my own on and off images based on a cool rubber ball I acquired while working at Wabco many years ago.