Repaying Gratitude is Round 1185 of Morikawa Jouji's Hajime no Ippomanga series.

Before the second round starts, at Ippo|Ippo's corner, Yagi praises Ippo's performance, while Kamogawa scolds him for getting hit with jabs.

Ippo states he tried to dodge, but couldn't gauge the distance, not being able to tell how far a southpaw can reach. Kamogawa tells Ippo to block punches and get used to the range.

While Kamogawa is explaining the battle plan, Ippo begins thinking Kamogawa, aside from his mother, is the only one who cares about him the most, so Ippo wants to show him his gratitude. At Antonio's corner, Antonio comments about Ippo's painful body blows, one of his trainers announces he asked Malcolm Gedo for advice.

Malcolm states that long-ranged punches will be most effective, when asked for more information, Malcolm says to pay him, however, Antonio's trainer had no more money after paying for Malcolm's drinks.

Antonio states he will rely on long-ranged jabs until he see's an opening. Seconds out is announced, while walking away from his corner, Ippo believes he will show Kamogawa that his time was well spent with him, by showing him the new Dempsey Roll. Kamogawa is impressed with Ippo, and believes Ippo can show him even more. 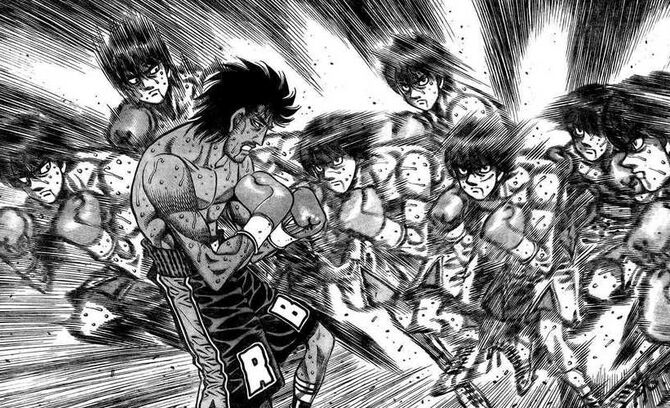 Second round starts with Ippo dashing towards Antonio.