As demand for cryptocurrency grows, global regulators are divided on how to keep up.

Most digital currencies are not backed by any central government, meaning each country has different standards.

Every seemingly small regulation announcement has driven the price of bitcoin and other cryptocurrencies in 2018.

Here's your guide to where digital currencies stand with governments and regulators around the globe.

In the photo below, Argentina President Mauricio Macri speaks at the G-20 meeting in Buenos Aires, Argentina, March 20, 2018.

View on bitcoin: Legal tender, depending on the country.

Policy on exchanges: No global regulator exists at the moment.

At a G-20 meeting this month, Argentina's central bank governor outlined a summer deadline for members to have "specific recommendations on what to do" and said task forces are working to submit proposals by July.

Italy's central bank leader told reporters after the meeting in Buenos Aires, Argentina, that cryptocurrencies pose risks but should not be banned, according to Reuters.

The Financial Stability Board, a global watchdog that runs financial regulation for G-20 economies, took a cautious tone in responding to calls from some countries to crack down on digital currencies.

"The FSB's initial assessment is that crypto-assets do not pose risks to global financial stability at this time," board Chairman Mark Carney said in a letter on March 18.

Carney, who is also governor of the Bank of England, pointed to the small size relative of the asset class compared with the entire financial syste.

"Even at their recent peak, their combined global market value was less than 1 percent of global GDP," he said.

The International Monetary Fund has also called for more cooperation.

IMF Managing Director Christine Lagarde highlighted cryptocurrency's potential as a vehicle for money laundering and the financing of terrorism.

In a March blog post, Lagarde called for policies that protect consumers in the same way as the traditional financial sector.

View on bitcoin: Legal tender as of last April.

Policy on exchanges: Exchanges are legal if they are registered with the Japanese Financial Services Agency.

Mapped: Cryptocurrency Regulations Around the World

Japan is the biggest market for bitcoin. Almost half of the digital currency's daily volume is traded in the country's currency, according to data from Cryptocompare.

Last week, the agency issued a warning to Hong Kong-based Binance for operating in the country without a license.

Hacks have been an issue in Japan and elsewhere.

It was the first country to adopt a national system to regulate cryptocurrency trading after its exchanges were subject to some well-known breaches including Mt.Gox.

In March, Japanese regulators issued punishment notices to multiple exchanges and forced some to stop business altogether after the $530 million theft of digital currency from exchange Coincheck.

View on bitcoin: Not legal tender, according to Financial Crimes Enforcement Network.

FinCen, a bureau of the Treasury Department, said in 2013 that "virtual currency does not have legal tender status in any jurisdiction."

handles the second largest volume of bitcoin, roughly 26 percent, according to Cryptocompare.

U.S. regulators differ in their definitions of bitcoin and other cryptocurrencies.

The Securities and Exchange Commission has indicated it views digital currency as a security.

Earlier in March, the agency expanded its scrutiny and said it is looking to apply securities laws to everything from cryptocurrency exchanges to digital asset storage companies known as wallets. The agency has focused on initial coin offerings, or digital coins released through fundraisers known as token sales, and has stepped up efforts to police them through recent subpoenas.

Christopher Giancarlo, pictured above, has gained a reputation as a more cryptofriendly regulator. In written testimony before the Senate Banking Committee in February, he advocated a "do-no-harm" approach to ledger technologies. He also briefly changed his Twitter bio to list "#CryptoDad" among the accolades.

The IRS says cryptocurrency is not actually a currency.

It defined it in 2014 as property and issued guidance on how it should be taxed.

Treasury Secretary Steven Mnuchin has been vocal about bitcoin's ability to aid criminals, telling CNBC in Davos in January his main focus on cryptocurrencies is "to make sure that they're not used for illicit activities."

View on bitcoin: No EU member state can introduce its own currency, according to European Central Bank President Mario Draghi.

About 4 percent of cryptocurrency's daily volume is done in euros, according to Cryptocompare.

European Commission Vice President Valdis Dombrovskis, pictured above, said at a February roundtable in Brussels that digital assets "present risks relating to money laundering and the financing of illicit activities."

The virtual exchanges and wallet providers should be under the "Anti-Money Laundering Directive," Dombrovski said.

"The commission will continue to monitor these markets together with other stakeholders, at EU and international level, including in the G-20."

"No member state can introduce its own currency," Draghi said in September.

"The currency of the euro zone is the euro."

Regulations differ within the bloc.

France's financial regulator Autorite des Marches Financiers released a list of 15 exchanges it would blacklist in March. The country said it will make a joint proposal with Germany to regulate the bitcoin cryptocurrency market, Reuters reported.

Legality of bitcoin by country or territory

"Only sterling is legal tender in the UK," according to Carney (pictured above).

Policy on exchanges: Legal, and need to register with the Financial Conduct Authority. They are required to meet the same anti-money-laundering counter-terrorism standards as other financial institutions, according to the BOE.

"The time has come to hold the crypto-asset ecosystem to the same standards as the rest of the financial system," Carney said in a speech.

"Being part of the financial system brings enormous privileges, but with them great responsibilities."

Carney said the digital currency "has pretty much failed thus far on" traditional aspects of money.

"It is not a store of value because it is all over the map. Nobody uses it as a medium of exchange," Carney said.

Many virtual currencies are trying to dislodge the British pound but "only sterling is legal tender in the UK," Carney said in another March speech.

Policy on exchanges: Legal but use of anonymous bank accounts for virtual coin trading is prohibited. Need to register with South Korea's Financial Services Commission.

Trading in South Korea makes up about 4 percent of daily volume of bitcoin. For other cryptocurrency such as XRP, trading in the Korean won commands a premium to U.S. 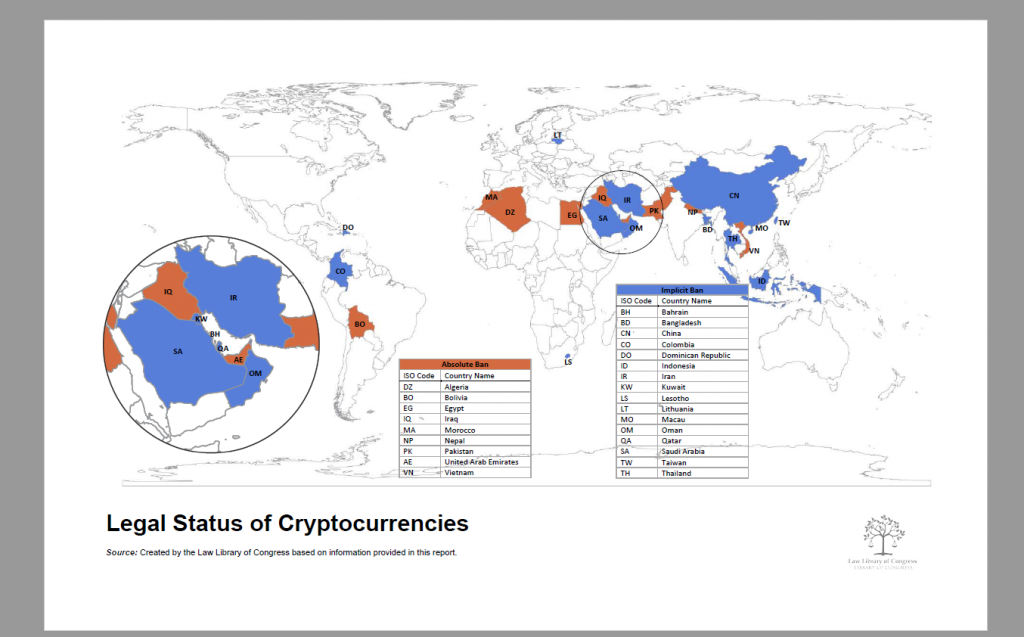 Asia's fourth largest economy has become a hub for trading but regulators have given mixed signals.

Financial authorities said in 2013 that bitcoin and other digital currencies are not legitimate currencies, according to the Korea Herald.

South Korea's justice minister said in January that the government was considering a shutdown of cryptocurrency exchanges.

A petition asking the government to hold back on "unreasonable" regulation got 280,000 signatures following the announcement. The government responded by saying it will take firm action against illegal and unfair acts in cryptocurrency trading.

The commission also banned the use of anonymous bank accounts for virtual coin trading in January but said it doesn't intend to completely shut down domestic exchanges.

The government has said that while it will not ban bitcoin exchanges, initial coin offerings and futures will remain under scrutiny.

In late February, a government official said South Korea had still not decided how to regulate.

"The government hasn't made any conclusion yet.

In 2017, the government banned ICOs — a way for start-ups to raise funds by selling off new digital currencies — and shut down domestic cryptocurrency exchanges.

In January, a senior Chinese central banker said authorities should ban trading of virtual currencies as well as individuals and businesses that provide related services.

But activity in crypto has carried on through alternative channels like mining.

Chinese authorities are looking to end the practice, according to Reuters, which cited an internal memo from a government meeting in January.

Policy on exchanges: Legal, may fall under regulatory purview of the Monetary Authority of Singapore.

The Singapore dollar makes up 0.02 percent of daily global bitcoin trading volume but the country has emerged as a hub for ICOs.

Cryptocurrency Laws and Regulations by Country

Two of the 15 largest coin offerings happened in Singapore, according to a PwC report.

Singapore is positioning itself as more friendly to cryptocurrencies than other regions. There is no strong case to ban digital currency in the city-state, Singapore's central bank said in February, noting "it is too early to say if they will succeed."

In January, the Monetary Authority of Singapore urged the public "to act with extreme caution and understand the significant risks they take on if they choose to invest in cryptocurrencies."

The agency also said cryptocurrencies are not legal tender and highlighted the risk posed by bitcoin's anonymity.

View on bitcoin: Not legal tender, reportedly taking steps to outlaw it.

The Indian government has issued warnings but does not currently regulate exchanges.

India is taking steps to make cryptocurrencies illegal to use within its payments system and is looking to appoint a regulator to oversee exchanges.

The government will "take all measures to eliminate the use of these crypto-assets in financing illegitimate activities or as part of the payment system," India's finance minister told lawmakers in New Delhi in February, according to a transcript by The Hindu newspaper.

The country's tax department sent notices about cryptocurrency investing to tens of thousands of citizens after a national survey showed more than $3.5 billion worth of transactions have been conducted over a 17-month period.

Swiss regulators have earned a reputation as some of the friendliest in the world when it comes to cryptocurrency.

Four in 10 of the biggest proposed initial coin offerings have been based in Switzerland, according to a PwC report. The town of Zug, just south of Zurich, is nicknamed "Crypto Valley" and is home to blockchain companies including the Ethereum Foundation, and cryptocurrency wallet company Cardano.

The PwC report highlighted how the small Swiss municipality has emerged as a "hotbed for blockchain-based companies and advisory services," and the country's growing "reputation of being a welcoming environment for companies and tech firms."

Swiss National Bank Chairman Thomas Jordan said in September that he sees bitcoin as more of an investment than a currency.

Argentina's President Mauricio Macri speaks at the G-20 meeting of finance ministers in Buenos Aires, Argentina, March 20, 2018.
Argentine Presidency | Reuters
An employee uses a smartphone as he demonstrates how to purchase bitcoins from a bitcoin automated teller machine (ATM) at the Coin Trader bitcoin retail store in Tokyo, Japan, Aug.