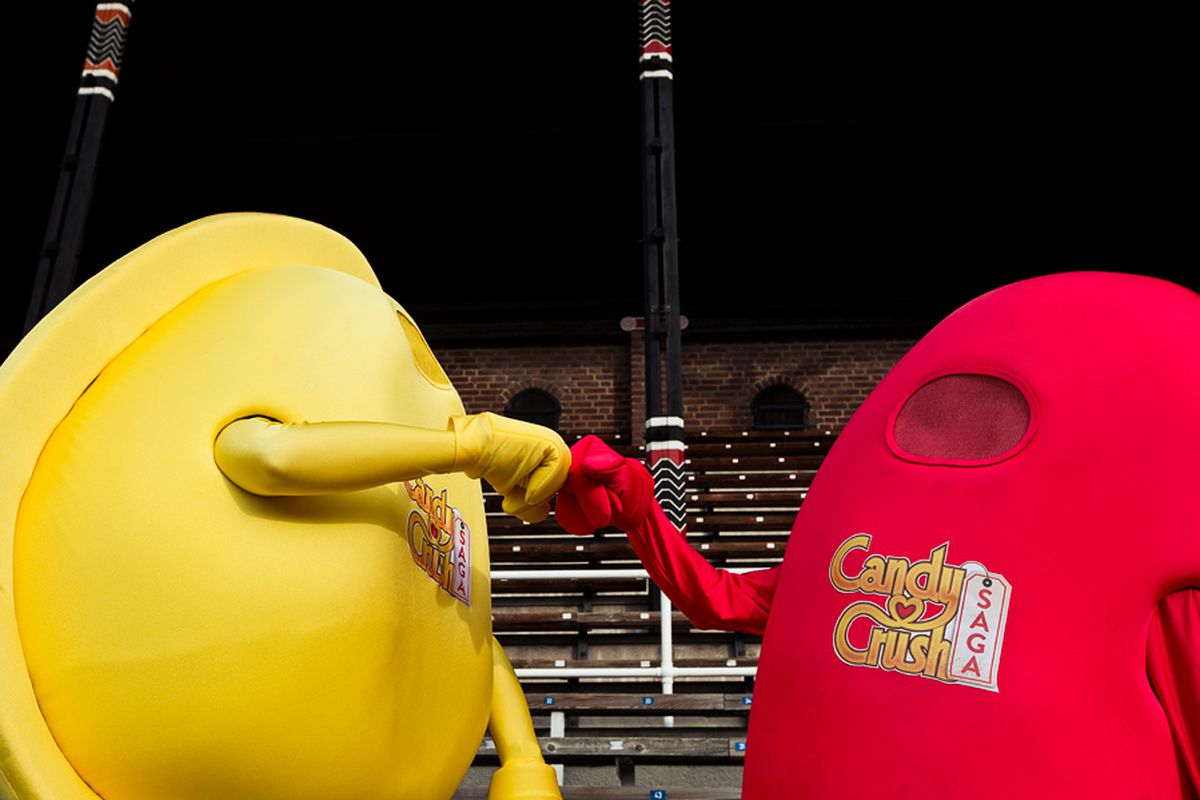 Brother can you spare a life? 'Candy Crush' maker prices under IPO

Prior to founding King, Riccardo Zacconi and Toby Rowland, the latter of who is the only son of British businessman Tiny Rowland, had worked together on uDate.com, a dating website created by Melvyn Morris which, by 2003, was the second-largest such site in the world.[3] Morris opted to sell the site to the leading dating website Match.com (a subsidiary of IAC) for $150 million in 2003.[3][4] Zacconi and Rowland joined with Thomas Hartwig, Sebastian Knutsson, Lars Markgren and Patrik Stymne, all whom had worked previously with Zacconi at the failed dot-com web portal Spray, to create a new company with angel investment provided by Morris, who became the company's chairman.[3] The company was initially based out of Stockholm, Sweden, and started with the development of browser-based video games.[5][6] The site, Midasplayer.com, was then launched in August of that year.[7]

Initially, Midasplayer.com was not profitable, and nearly went bankrupt until a cash infusion from Morris on Christmas Eve of 2003 helped to finance the company.[1] By 2005, the company had been able to turn a profit.[1] During this year, the company raised $43 million by selling a large stake to Apax Partners and Index Ventures.[6] This investment was the last one that the company received before its initial public offering in 2014.[8] Midasplayer.com was rebranded King.com in November 2005.[7] King.com continued to develop games for its web portal, which it would also share to other web portals like Yahoo![9] Overall, King had developed about 200 games for their portal.[2] By 2009, the company was making about $60 million annually.[10] Rowland departed the company in 2008 to found Mangahigh, a web portal aimed for educational math games,[11] and sold his stake back to the company for $3 million in 2011.[4] Angel investor and former board member Klaus Hommels sold his similar stake at the same time.[6]

King.com saw a significant drop in players on their portal games as a result, and started to develop their own Facebook-based games using the games already developed on the King.com portal, with their first such game released in 2010.

King.com used their web portal as a testing grounds for new game ideas and determine which ones to bring to Facebook, as well as determining how to implement various microtransactions for tournament-style play into the Facebook games.[12] Their first cross-platform web portal/Facebook game, Miner Speed, which allowed sharing of player information between platforms, was released in 2011, and was a simple match-3 tile game inspired by Bejeweled.[13]

Following this model, in October 2011, the company released Bubble Witch Saga to both platforms.

Bubble Witch Saga introduced the nature of a "saga" game, that instead of playing the same gameboard for as long as the player could continue to match matches, that instead the game offered individual levels that would challenge the player to complete certain goals in a limited number of turns. These saga elements allowed for the basics of social gameplay, but did not require the time investment that then-popular titles like Zynga's Farmville required; players could play just for a few minutes each day through the saga model.[14] The formula proved extremely successful, and January 2012, Bubble Witch Saga had over 10 million players and was one of the most-played Facebook games.[15] By April 2012, King.com had the second largest player count, around 30 million unique users,[6] second only to Zynga on the Facebook platform.[9] Facebook's director of games partnerships Sean Ryan described King.com's growth on the platform as "They were not a flash in the pan – they've been around seven years.

But they came out of no where in an area that was unexpected."[16] King.com next released Candy Crush Saga in April 2012, based on the popularity of its Candy Crush web-portal game and following the saga model from Bubble Witch Saga.[17] The game attracted more than 4 million players within a few weeks.[18]

The popularity of Bubble Witch Saga and Candy Crush Saga led King.com to start a new strategy into developing for the growing mobile game market, in a manner that would allow players to synchronise with the Facebook platform.

Zacconi said that "As consumers and the industry focus more on games for mobile devices, launching a truly cross-platform Facebook game has been a top priority for King.com."[19] A mobile version for iOS device of Bubble Witch Saga was released in July 2012,[19] while the iOS mobile version of Candy Crush Saga was released in October 2012.[20] Both games saw boosts in the number of unique players with the mobile introduction; King.com saw that previously-declining player counts for Bubble Witch Saga become steady with the mobile version's release, while Candy Crush Saga saw more than 5.2 million unique players on Facebook in November 2012 and which were continuing to climb.

In March 2013, on the ten-year anniversary of its founding, the company announced it was dropping the ".com" part of its branding and would continue on as just "King".[22]

In mid-2013, King.com had considered filing an initial public offering (IPO) in the United States.

Zacconi had said that "The IPO is an option...We are building the company and part of that is investigating options."[23] The company applied for IPO in September 2013. Its filing was made using allowances in the Jumpstart Our Business Startups Act to keep details of the IPO secret until it was to be offered.

The IPO was backed by Bank of America, Merrill Lynch, Credit Suisse Group AG and JPMorgan Chase & Co. The IPO gained great interest, as it followed Zynga's $1 billion IPO in 2011 and Twitter's IPO earlier in the month.[8]

Priced at $22.50 a share, the middle of its projected price range, the IPO valued the company at US$7.08 billion. About $500 million was raised through the sale of 22.2 million shares. Of that, 15.3 million shares came from the company and the rest from Apax and other stakeholders. It was the largest ever IPO for a mobile/social gaming company in the US, narrowly eclipsing Zynga's 2011 offering.[1] To celebrate the debut, Candy Crush mascots took to the New York Stock Exchange.[4] Morris is the company's largest shareholder with approximately 35.6 million shares valued at $821 million.[3][4] The company began trading under the "KING" symbol on the New York Stock Exchange.[1]

Shares of King fell 15.6% on the first day of trading, closing at $19.[4] By June, the company's valuation had dropped by $2 billion, though otherwise was still profitable.

Zacconi noted that their strategy from this point was not to find another "mega-hit" like Candy Crush Saga, but to "build a portfolio of games", carrying King's game design approach to other genres.[10] Revenue following the IPO were over $2.6 billion in 2014, with Candy Crush Saga generating nearly half of that amount.[24]

In November 2015, Activision Blizzard announced its plans to acquire King for $5.9 billion.

Upon announcement of the news, USA Today reported that the deal "gives Activision immediate access to the growing mobile gaming audience, the fastest-rising sector in video games".[5] On 23 February 2016, Activision Blizzard closed its acquisition of King for a deal of $5.9 billion.[26] Activision Blizzard as a result operates the world's largest game network,[27] reaching around 500 million users[27] in 196 countries.[28] About the King acquisition, the CEO of Activision Blizzard explained that "we see great opportunities to create new ways for audiences to experience their favorite franchises, from Candy Crush to World of Warcraft to Call of Duty and more, across mobile devices, consoles and personal computers."[27]

As part of a large workforce reduction announced in February 2019 across the whole of Activision Blizzard, King's Z2Live studio in Seattle was shuttered.[29]

King games offer asynchronous play, enabling users to connect to their Facebook account whilst playing on their smartphone or tablet device.

This means that the user's progress is updated across all platforms, allowing the player to switch from smartphone, to tablet, to Facebook without losing their progress in the game.[32][33]

Bubble Witch Saga was King's first mobile game, released in July 2012 after its launch on Facebook in September 2011.[34][35] Papa Pear Saga was released in March 2013 on Facebook, it is a Peggle variation.[36]

Around 2012, Pyramid Solitaire Saga was soft launched on Facebook.

This game is a variation of Bookworm.

In 2013, King acquired the Defold game engine, developed by Ragnar Svensson and Christian Murray in 2007 as a lightweight 2D game engine. The two had offered the engine to King as well as their services as contractors to support it, and later bought the engine, using it first for the game Blossom Blast Saga.[41] In March 2016, King released the Defold engine as a free development tool for any user.[42]

King announced in April 2017 that they will be developing a mobile Call of Duty game, a property owned by Activision; the game would be one of the first ones outside of the casual mobile space for the company.[43]

King's most popular game is Candy Crush Saga, which was launched on King's website in March 2011, which is a tile-matching game.

It launched on Facebook in April 2012 and quickly gained popularity.

Following its success on Facebook, King launched Candy Crush Saga on mobile (iOS and Android) in November 2012. The game was downloaded over 10 million times in its first month.[44] In January 2013, it became the number one most played game on Facebook.[45][46] It had over 45 million monthly users in March 2013.

While King continues to release other titles, the company's principle focus as of November 2017 are on its four most popular series: Candy Crush Saga, Bubble Witch Saga, Pet Rescue Saga, and Farm Heroes Saga.[48] 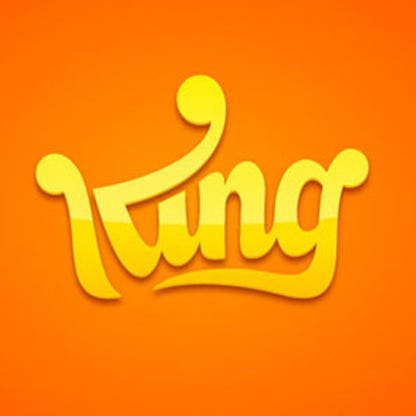 2012 Pyramid Solitaire SagaAvailable Based on the solitaire card game Pyramid, players attempt to clear a board of cards by selecting cards that have are the next highest or lowest value of the card they just selected or dealt themselves.

Candy Crush SagaAvailable A match-3 swapping tile game but includes special candy tiles that can be created from matches, and unique goals.

Pet Rescue SagaAvailable Based on SameGame where the player selects matching adjacent boxes of the same colour to clear the game board, freeing animals atop the boxes once they reach the bottom.

2013 Papa Pear SagaAvailable A variation of Peggle where the player shoots projectiles onto a game board to clear various pegs and land the projectiles into scoring containers at the bottom of the game board.

Pepper Panic SagaDiscontinued A match-3 swapping tile game to collect hot peppers, where matches are based on both colour and size, and a successful match leaves behind a pepper of a larger size. 2014 Diamond Digger SagaAvailable Another variation of SameGame, but where matching groups of same-coloured tiles clears out dirt and rock to create a route for water to flow between the level's entrance and exit.

Scrubby Dubby SagaDiscontinued A tile-matching game similar to Chuzzle where instead of swapping titles, the player slides a row or column to make matches.

Paradise BayDiscontinued A village simulation game in the nature of Farmville, developed by Z2, a studio acquired by King. This game was permanently discontinued permanently on the 17th of May 2019.[49]Blossom Blast SagaAvailable A variant of Talismania, flowers of various colours are placed on a hex grid, and the player traces a line of similar-coloured flowers to match them up and make them bloom.

Fully bloomed flowers then expand and "pop", clearing the flowers around them. 2016 Candy Crush Jelly SagaAvailable Expanding on Candy Crush Saga and Candy Crush Soda Saga, with many levels requiring players to spread jelly across the game board, and adding boss battles with a computer opponent.[50]Farm Heroes Super SagaAvailable Expanding on Farm Heroes Saga, players must help the squirrel to get the nuts by moving the squares on the board however each move you take the wind blows in that direction moving the couloirs on the board.

Shuffle CatsAvailable A game like rummy where the object is to meld a number of cards before the opponent does.