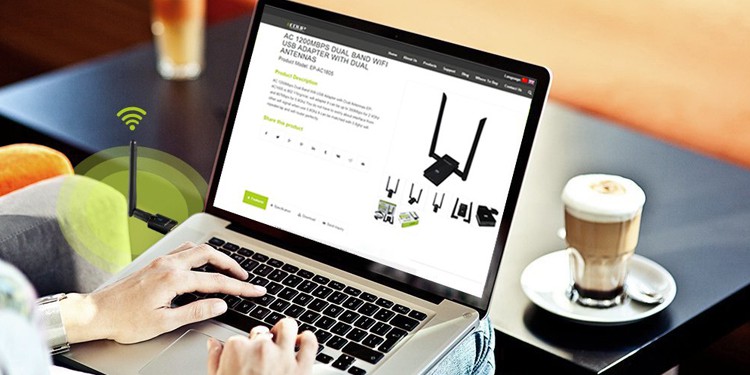 Buying The Best USB Wi-Fi Adapter For You

Now, let’s get into the buying guide.

While we feel like we’ve provided a ton of great options for you to choose from, it’d be a shame if you didn’t choose correctly. We’ll use this section to help you make the right pick, and explain any jargon that you aren’t familiar with.

What’s the difference between 2.4 GHz and 5 GHz?

2.4 GHz and 5 GHz don’t refer to processing power in this context.

Instead, they refer to the wireless network spectrum that Wi-Fi devices operate on.

2.4 GHzis the older standard, and is what most routers and devices are still using. 2.4 GHz is somewhat slow and laggy when compared to 5 GHz, but it has a much greater range and compatibility.

5 GHz is the newer standard, and is mainly used by newer devices.

It’s much faster and has lower latency than 2.4 GHz, but has a much shorter range. You may also experience compatibility issues with older devices that are only made to connect to 2.4 GHz. To get around this, most routers and Wi-Fi antennas support both standards.

Even if all devices involved support both standards, use 5 GHz where possible.

This is especially important for gamers, since the lower latency of the 5 GHz standard will ensure less lag when playing online.

2.4 GHz generally isn’t suitable for gaming purposes, but can suffice for web browsing and media consumption.

Important to note: no Wi-Fi connection will ever beat a hardwired ethernet connection when it comes to stability, latency, and overall performance. If you’re doing professional work or pro gaming, we recommend an ethernet cable whenever possible.

802.11ac is the current Wi-Fi standard, supported by every modern device and router.

It also offers higher performance than older 802.11 standards, especially 802.11n and 802.11b. If you’re worried about compatibility, don’t be: 802.11ac is backwards-compatible with routers using these older standards. You will be restricted to the speeds of those older standards if you utilize this feature, though.

802.11ax is also on the horizon, but unfortunately hasn’t come to market yet.

When it does, we’ll likely come back to this article to make appropriate edits.

In terms of raw download speeds, you typically won’t see a massive difference between a USB 2.0 and USB 3.0 adapter.

The max throughput of USB 2.0 is considerably higher than that of the average Wi-Fi connection, and USB 3.0 even more so.

However, that doesn’t mean you shouldn’t get a 3.0 adapter whenever possible.

First and foremost, a 3.0 adapter will be able to keep up with particularly high-performance Wi-Fi networks.

Particularly, connection speeds of over 100 mbps, with routers using 802.11ac and broadcasting at 5 GHz.

But more importantly– even for slower networks– latency. USB 3.0 has much lower latency than USB 2.0, and latency is especially important for gaming.

High latency results in a laggier, less responsive online gaming experience. Using Wi-Fi at all already increases latency, but using a USB 2.0 adapter on top of that can result in an unplayable experience for gamers.

If you’re going to game on Wi-Fi, a USB 3.0 adapter is a necessity, not an option.

Antennas, and why more is better

Wi-Fi is a wireless signal.

We aren’t going to dive into the nitty-gritty of wireless networks and how they work, but every wireless device has a built-in antenna, even if it isn’t visually obvious.

What Is a Mesh Wi-Fi System?

Your smartphone, for instance, has an antenna; you just can’t see it.

Unfortunately, these invisible antennas do come with some sacrifices. While it’s nice to have an antenna be so small you don’t even know it’s there, this results in reduced reception and performance in most scenarios.

For high-performance Wi-Fi, you want an adapter with large, discrete antennas.

This will allow the fastest speeds, lowest latency, and longest ranges to be achieved. Speaking of antennas…

MIMO technology is used by routers and supported devices to operate faster, without fighting each other over who gets to send and receive data first. Many MIMO Wi-Fi adapters will also have extra antennas built in, presumably to take better advantage of this technology.

Where to buy cryptocurrency with neteller

Latency generally won’t be affected by this, though.