Best Options For An Infiniti Qx50 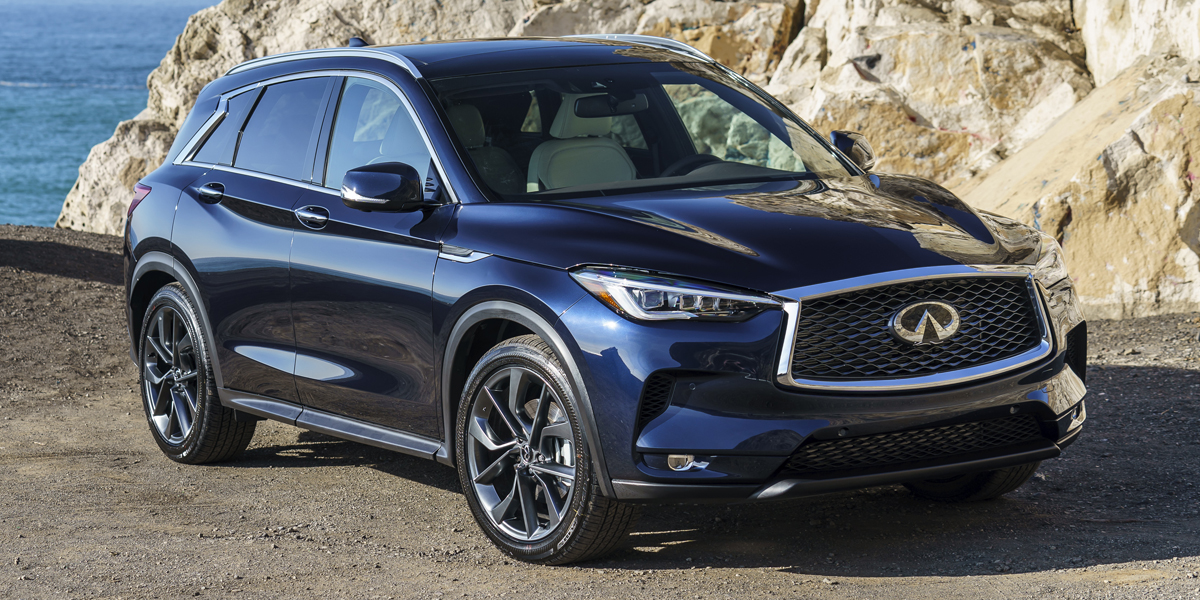 The 2019 Acura RDX and 2019 Infiniti QX50 are both brand new, and as we explained during our first drives withthem both, they're really good.

Difference between coin and token in cryptocurrency

In the past, these two weren’t even considerations along the Audi Q5 and BMW X3, but now there's serious reason to choose them over the German powerhouses.

They both have new bones, loads of tech, and turbocharged engines that help transform them from nearly forgotten options to serious contenders. But which one is better?

Acura: The RDX is rigid, quick, and makes the QX50 feel too soft comparatively, even without the optional A-Spec package tested here.

The throttle response and suspension have both been tweaked on this particular model, but it's still far from being a true “performance SUV.” It's not nearly as fast or agile enough to compete with the Alfa Romeo Stelvio Quadrifoglio, for example.

A 2.0-liter turbocharged four-cylinder and 10-speed automatic, essentially ripped from the Honda Accord, produces 272 horsepower and 280 pound-feet torque. It's down seven horses over the outgoing version, oddly enough, but doesn't feels sluggish.

In Sport and Sport+ modes, the throttle response is aggressive and the 10-speed auto downshifts without hesitation, dropping seamlessly up to four gears when you mash the throttle.

In Snow and Comfort drive modes, it takes a bit longer to get off the line – but the torque is almost always available. 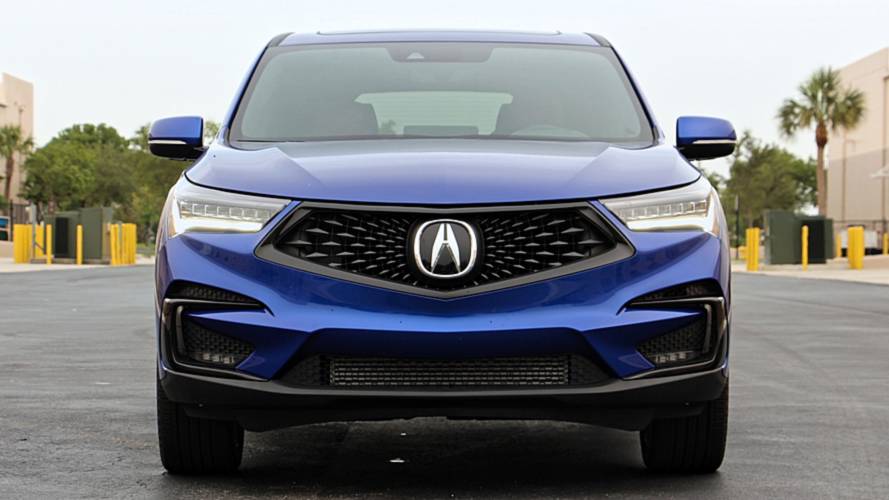 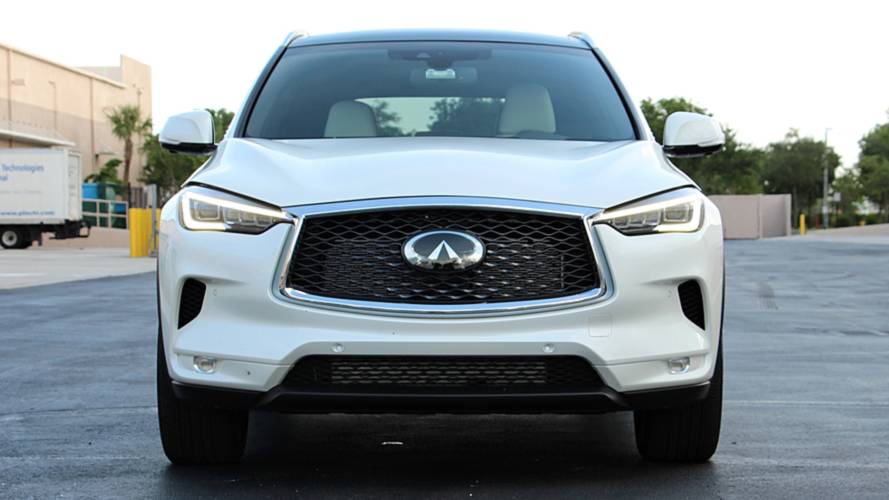 The fully revamped compact crossover has a super-comfortable suspension setup, a smooth continuously variable transmission, and like most of its brand siblings, lightweight drive-by-wire steering.

Yes, I've been critical of Infiniti's drive-by-wire steering in the past – particularly on the Q60 Red Sport – but it actually makes a lot of sense in a CUV.

The 2.0-liter, variable-compression engine (a world first) is punchy, and avoids any noticeable turbo lag. With 268 horsepower and 280 pound-feet torque, the new QX50 is quick – not just quick for its class, but genuinely quick off the line.

It drives more like a high-riding hatchback. It's nearly as quick as the RDX in a straight line, but its CVT isn't as likable.

Acura: Even without the optional A-Spec package, which adds unique gunmetal-colored wheels and black trim, the RDX is sharp and sculpted in all the right places, and wears Acura's new Precision grille beautifully (arguably better than any other Acura).

Yes, the floating roof is a questionable feature, but the RDX easily has one of the best applications of it.

But the cabin looks cluttered, mired by too many buttons and not a single cohesive design direction. The worst styling decision is the button shifter, which comes standard on all Honda and Acura but looks lousy on all of them.

This particular tester uses a mix of black leather and soft Alcantara on the dash, with silver accents on the door panels, steering wheel, and center console.

The 12-way adjustable seats aren't super comfortable. I was constantly searching for a better seating position.

Acura says the 16-way adjustable seats on the range-topping Advanced model might be better, but I think it's the shape and not the variety of configurations that didn't jive with my lanky six-foot frame. 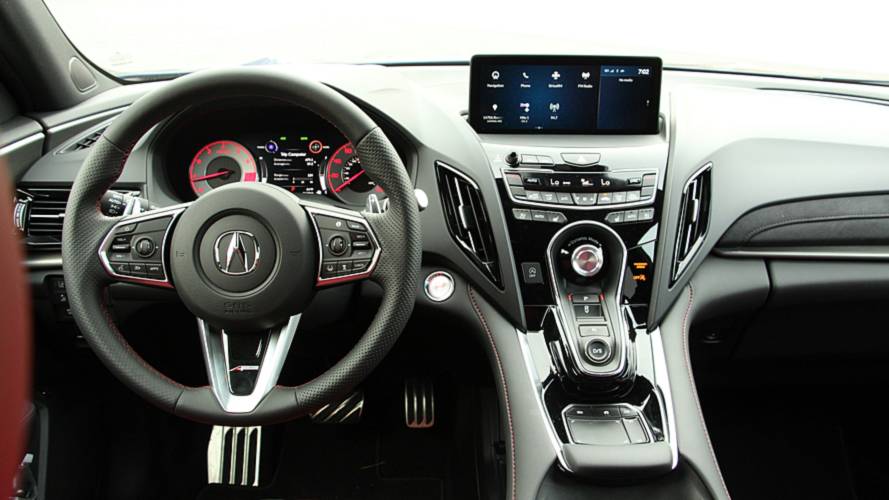 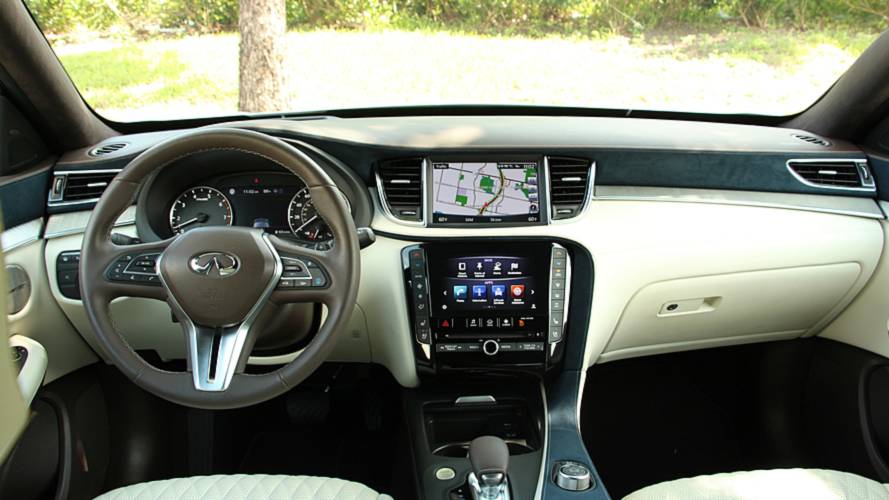 Infiniti: The QX50 is damn pretty.

It wears its traditional Infiniti styling cues well, and its designers get brownie points for not succumbing to the floating roof trend.

There's a lot to like about the fit and finish of the cabin in this range-topping QX50 Essential. Equipped with the optional Autograph package ($2,000), unique blue suede and brown leather accents join white, quilted leather seats.

Acura and Infiniti have built two of their best products ever. But which is better?

The eclectic mix is a welcomed departure from old-school finishes like lacquered wood trim and faux carbon fiber. It's just a bit pricey.

The seats on the QX50 are a big upgrade over the RDX.

They’re spacious, comfortable, and highly configurable. Even the back seats are a nice place to sit. The cabin is whisper quiet, too – there’s no obnoxious droning from the engine.

Acura: Acura's new True Touchpad Interface is one of the best infotainment systems around.

It makes quick work of the main menu and basic functions.

But True Touchpad gets a little wonky when diving into more detailed functions. Apple CarPlay and Android Auto don't have the same point and click functionality and require a bit of scrolling.

And satellite radio, for example, needs some fine tuning for things like, well, tuning. Still, it's a superior system to whatever Infiniti is selling. 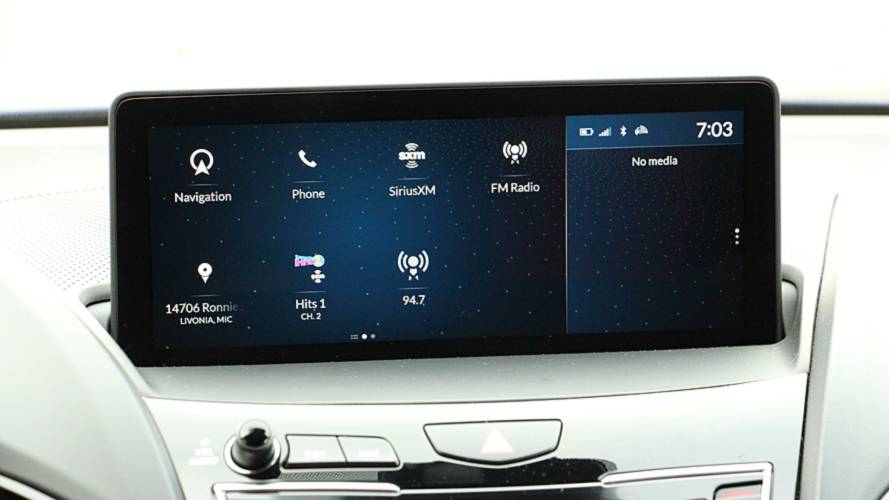 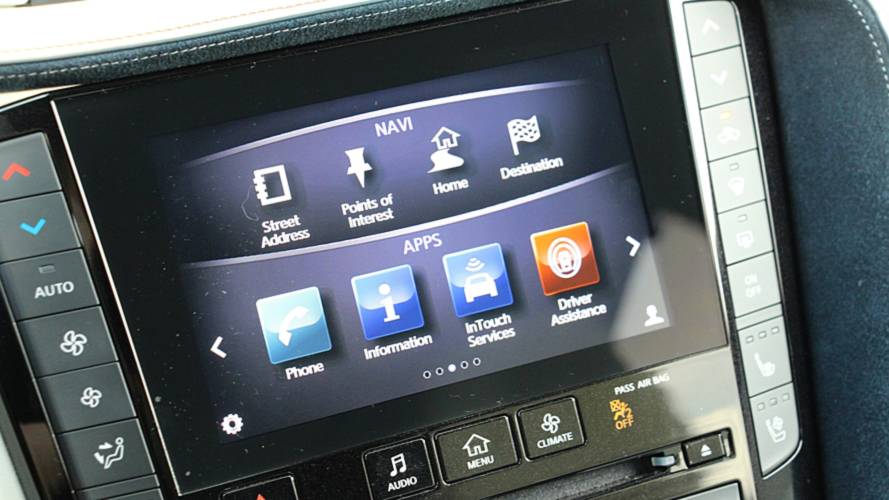 Infiniti: For a car that looks this good from the outside, and feels so modern on the inside, you'd expect technology that follows the same theme.

But no. Infiniti's outdated dual-screen display falls short of most of its competitors in both attractiveness and ease of use (thank goodness an update is coming).

The navigation graphics on the upper 8.0-inch screen are outdated. Poor touch sensitivity on the lower 7.0-inch screen, which controls the climate system, radio controls, and phone connectivity, make it difficult to use while on the move.

And the center-mounted dial controller doesn't do much of anything, apart from zoom in and out of the navigation screen. The Sensory package includes 16 Bose speakers, but they don’t sound like much of an upgrade.

Acura: Just looking at the two crossovers side-by-side, you can tell the RDX is a big boy – its wheelbase is a whole 2.6-inches longer than the outgoing model.

The RDX also has a rear hidden cargo area.

Lift up a section of the floorboard and there’s a small storage compartment underneath, perfect for hiding things like purses and groceries. 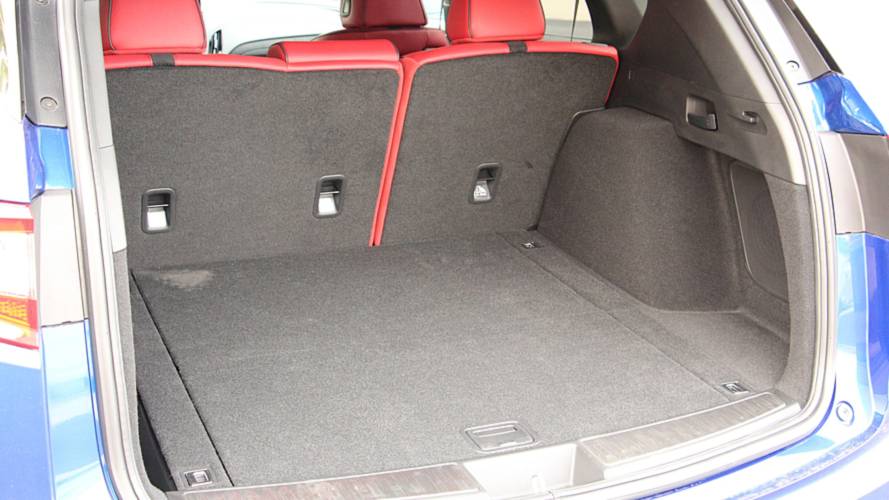 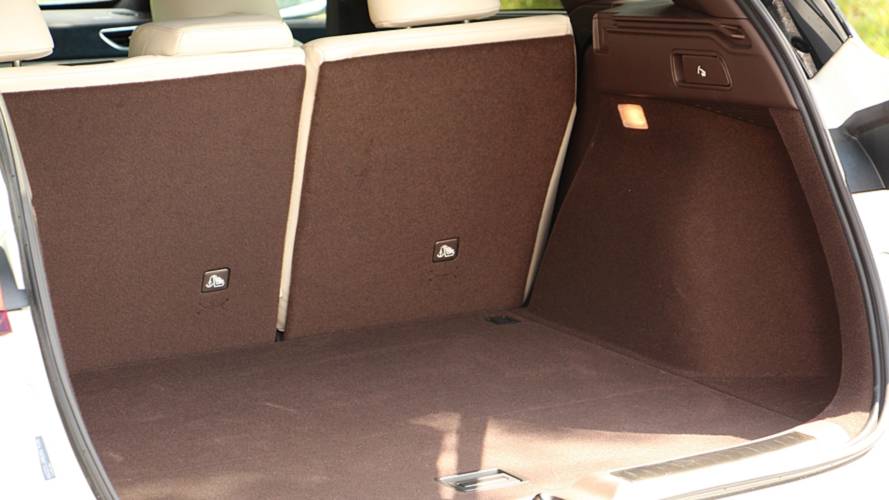 Infiniti: Even though the RDX looks larger, the QX50 is actually a bit more spacious.

It’s down on rear legroom at 35.3 inches, but up on cargo room. A whole 31.1 cubic feet are found behind the second row, and 64.4 cubes with the second row folded flat. The super comfortable quilted back seats make the lack of legroom more manageable, and both rear hatches are fully automatic, controlled either by key or a button mounted by the driver.

Infiniti: Nissan's ProPilot is one of the best safety systems out there.

Combining the ProAssist ($550) and ProActive ($2,000) package to make up the full suite, the QX50 cruises comfortably at highway speed needing little intervention from the driver, brakes all the way down to zero, and takes off automatically when you flick the cruise control switch on the steering wheel.

It stays centered in the lane at all times, and can even take more dramatic turns where other systems might fail. It came in really handy while navigating Miami traffic.

Infiniti needs to be careful calling ProPilot an “autonomous drive support” system, though. It's still far from being fully autonomous; the steering control regularly cut out, and braking to zero was still harsh, especially in heavy stop and go traffic. 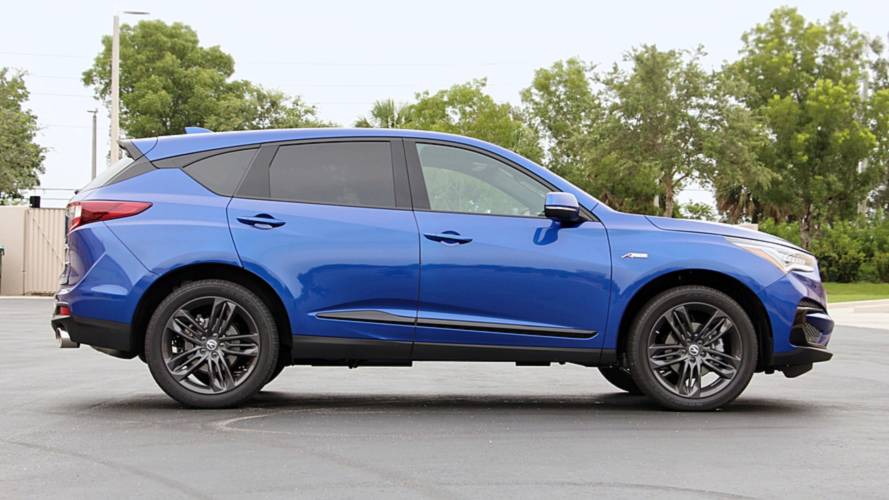 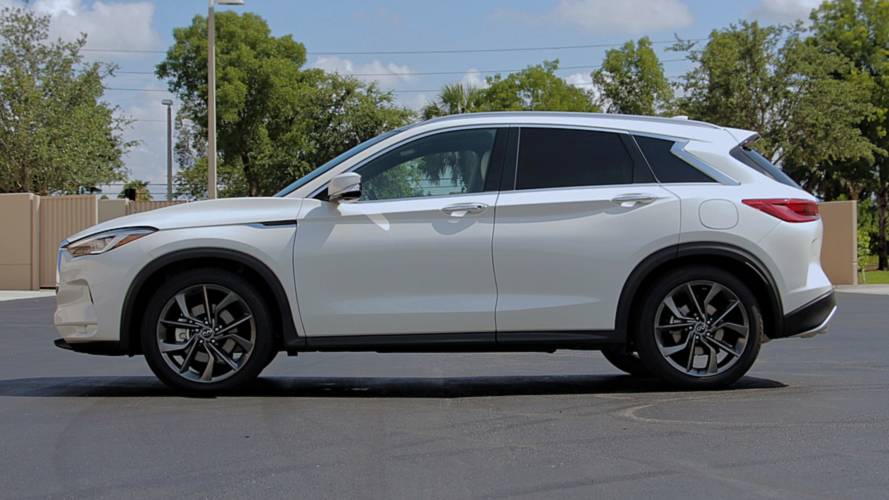 Acura: Even though ProPilot is good, it was still difficult to find a clear-cut winner between these two systems.

AcuraWatch is a fine suite, too. Collision mitigation, adaptive cruise control, lane keep assist – the entire suite comes standard on all trims. It competes admirably with ProPilot in terms of lane control and automatic braking, but falls short on steering assist, and doesn’t handle heavy traffic situations as smoothly as the QX50 does.

Acura RDX Vs. Infiniti QX50: The Best Of Their Brands

It’s a little to harsh and inconsistent.

Infiniti: Infiniti's new Variable-Compression Turbo is one of the most-efficient non-hybrid engines in this segment – only the Lexus NX (33/30/31) and Jaguar F-Pace (26/33/29) are better by comparison. The QX50 returns 24 miles per gallon in the city, 30 on the highway, and 26 combined, with a total cruising range of 384 miles.

Premium fuel is recommended, though. 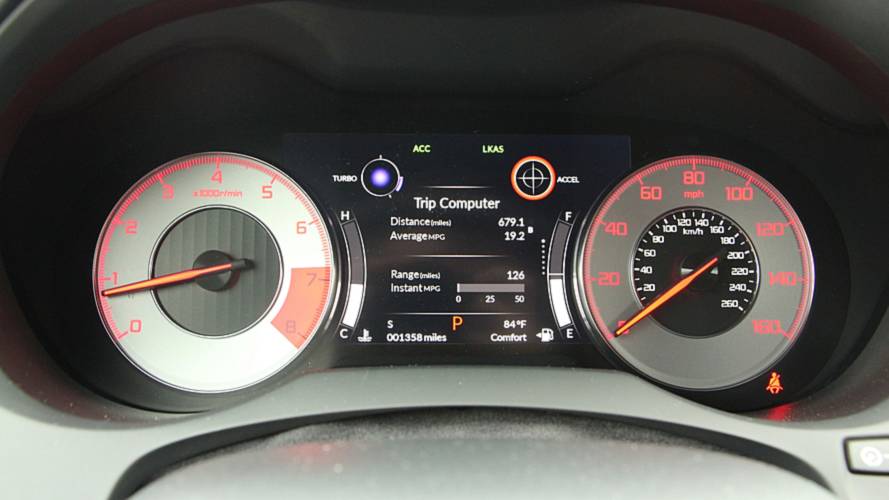 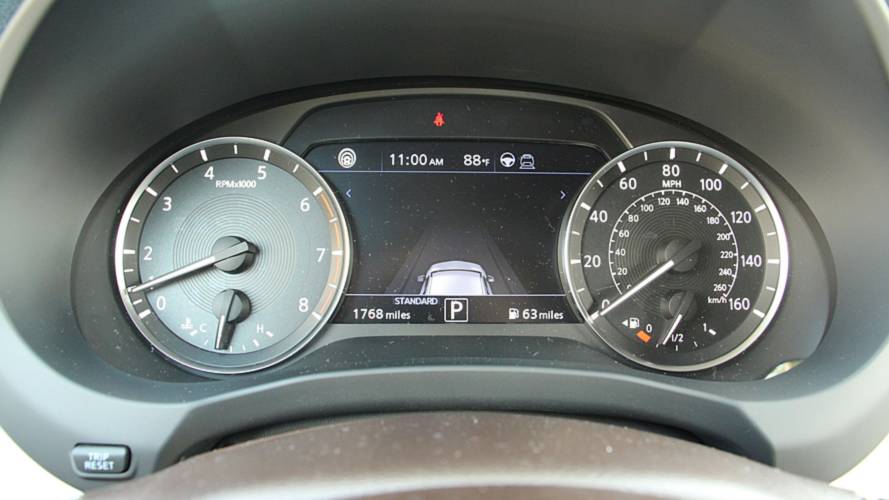 Acura: Even though the RDX is only slightly more powerful than the QX50 (272 vs 268), it's much less efficient.

The turbocharged 2.0-liter returns 21 miles per gallon in the city, 26 on the highway, and 23 combined. That puts it somewhere in the middle of the segment, but well below the Infiniti.

But don't let Infiniti fool you into thinking that it's the more affordable SUV. The RDX with the A-Spec trim we tested was just $46,495, and it was arguably just as well equipped.

Acurawatch, 20-inch wheels, and leather-trimmed sport seats are standard, unlike on the QX50, where they cost a lot extra. 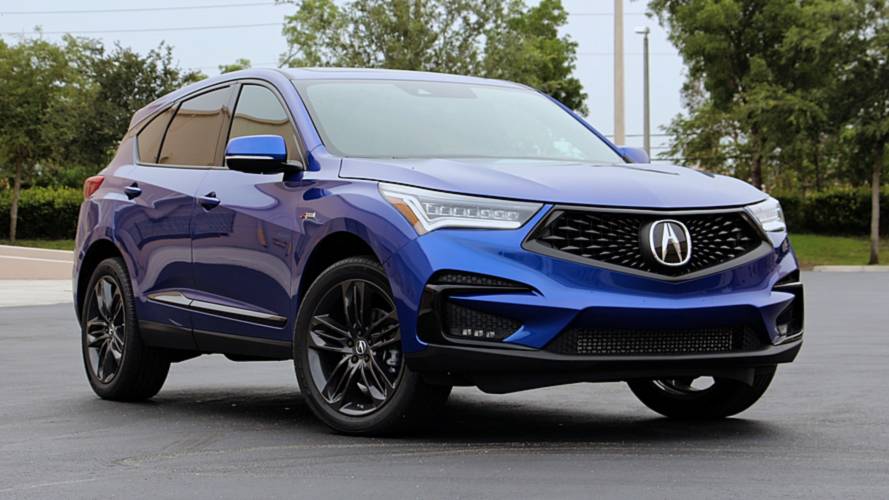 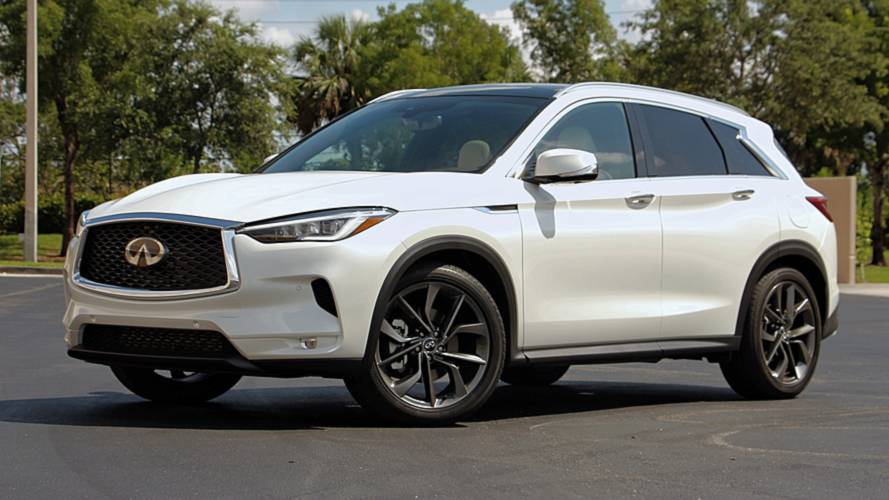 That's a whole $14,435 more expensive than the cheapest Essential model with all-wheel drive.

The $7,500 Sensory Package is the most expensive option, while the Premium Audio system adds another $900 onto the asking price, ProAssist is $550, and the ProActive package – which includes things like blind spot intervention, lane departure warning, and high-beam assist – is another $2,000.

A near-$60,000 asking price in this segment, luxury or not, is a tough pill to swallow.

Both of these luxury crossovers are impressive, attractive, and well equipped.

But the QX50 just barely nudges the RDX out.

Even though the Acura looks sharp, is fun to drive, and is slightly better in the tech department, the variable compression engine on the QX50 is extremely impressive and ProPilot is among the best in this class. Not to mention the Infiniti wears elegant, beautiful sheet metal.

You'll have to pay more to get all of the features you want – ProPilot in particular. But the QX50 still offers enough in the way of style and comfort out of the box to keep the RDX at bay. 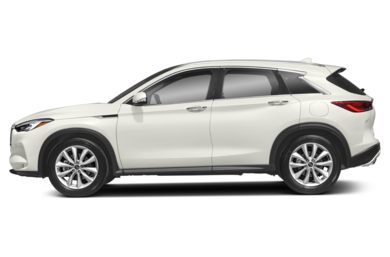