I have a tie of Hober's and I have seen Winston's ties in person.

Being a bigger fan of the garza grossa than the garza fina, as well as a fan of customisation, I prefer Hober's ties.

I have a swatch of the Dark Red, and it's not quite dark enough to be burgundy.

If my Turnbull & Asser burgundy tie is the same as what Hober has, it's a true burgundy. T&A uses the same source for grenadine, but it's possible they have their own colours.

I find that folds in ties are useless marketing gimmicks to sell more expensive ties that unnecessarily use more silk.

An unlined 7-fold tie can be kind of nice in that it is pure silk, but grenadine needs a lining.

Everyone making quality Grenadine ties is using the same 2 suppliers in Como, Italy.Preferring
one weave over the other ( Grossa vs Fina) is personal taste.

One is not better than the other.

I have recently switched to a lighter lining for my Grenadines. I did this because I received communications from customers saying they would prefer it if the Grenadine ties were not quite as bulky.

The feedback I have received since the switch has been overwhelmingly favorable. I have also added the option of 60" and 62" lengths to my standard length ties. These ties need to be individually cut and the delivery is slower. I am not geared to fully customize ties, which Hober can do.

Matt S is on the mark about the value of "folds" in ties. It adds nothing but cost and I suppose it pleases "conspicuous consumers". If anyone would like to chat about Grenadine ties,ties in general,or about my more than 55 years in the business , feel free to give me a call.

I own the dark red Hober grenadine grossa for the very same reason you indicated.

I thought that it would be more versatile than the burgundy and I think I chose correctly.

Very happy with the color and construction of the tie. 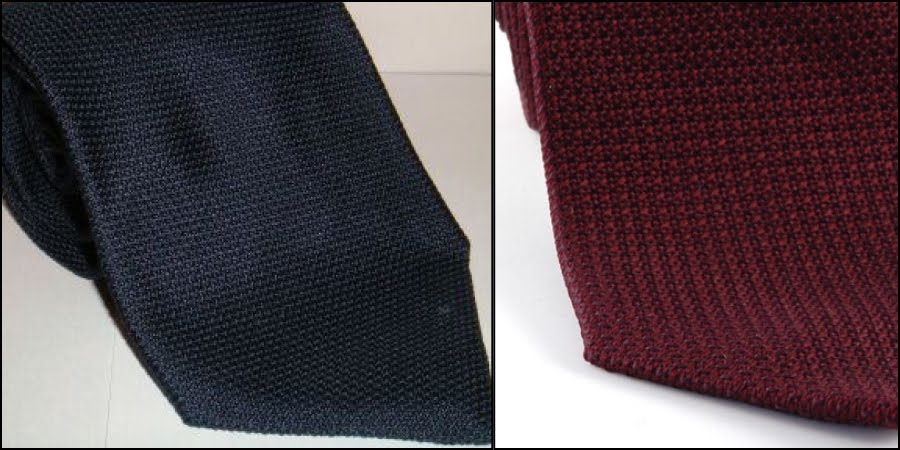 I just placed an order for burgundy last night, and the website makes it clear that orders can't be altered. Well, I guess I'll be able to judge burgundy in person soon to see if you're right.

I just placed an order for burgundy last night, and the website makes it clear that orders can't be altered. Well, I guess I'll be able to judge burgundy in person soon to see if you're right.

Here's my Turnbull & Asser burgundy grenadine, which is darker than Hober's "Dark Red":

This could very well possibly be the colour you're getting.

This could very well possibly be the colour you're getting.

Analysis of risks and benefits of a national cryptocurrency

That's not bad at all. From the Hober stock photo, it looked so much closer to black.

Thanks for the insights

If you email David, I'd be surprised if he wouldn't alter your order for you.

He is a pleasure to work with.

I just placed an order for burgundy last night, and the website makes it clear that orders can't be altered. Well, I guess I'll be able to judge burgundy in person soon to see if you're right. :-/

Hober's burgundy is quite a bit darker than "dark red."

Hober's burgundy is not almost black.

Here I am wearing the burgundy prometeo grenadine. Ignore shirt choice, had just picked up this suit and it was late night and didn't want to waste a new shirt so I wore what I already had on.